There was a moment of epiphany that I had today and I’m pretty sure it had something to do with seeing the dazzling animated squares by John Johnston above. It was actually quite lucky that I saw this piece in my Tumblr feed which is filled with visual interestingness. But the post found it’s way to the surface thankfully and I couldn’t help but give a shout out for its wonderfulness, and apparently there is a method behind it  – and I want to know what it is!

And then for the billionth time I walked the hallway just outside of the classroom I teach and noticed the walls as squares – as in square pixels. And that they represented this unusual opportunity consider them as a concrete pixel display. 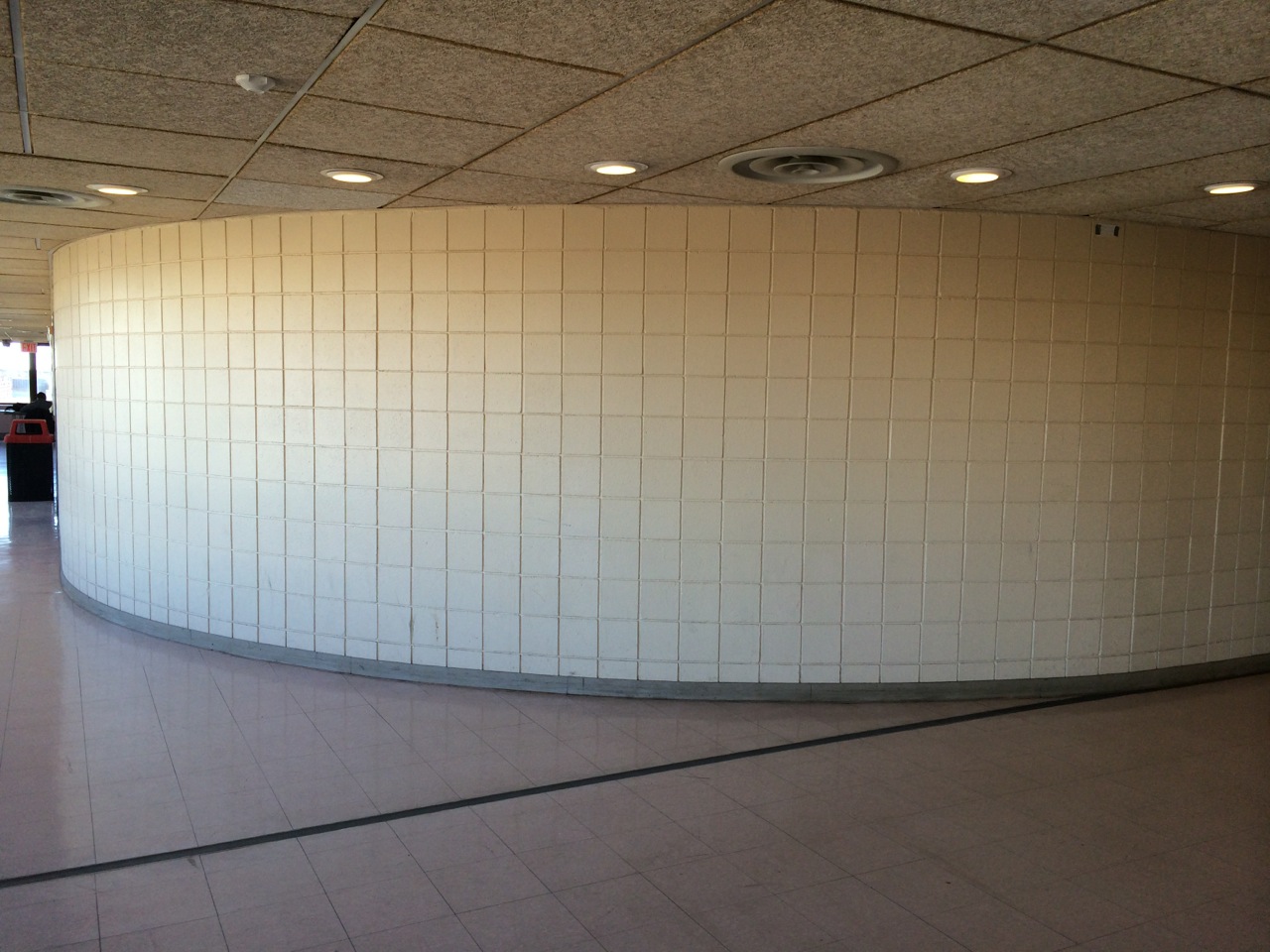 These concrete blocks that were part of the unique architectural finger print of this odd public building presented an opportunity. Each 7.5″ x 7.5″ square could be any color and with 12 pixel by virtually 100s pixel wide space there might be some opportunity to create a pixel based mural. And even animate it.

There are these lovely graffiti GIFs out there, which capture a public mural’s ephemeralness by emphasizing the piece in transition. You can’t be sure what was finally ‘left behind,’ but you see the evolution of the piece captured as an animated event.

I set out to experiment with my new found pixel wall, with only about an hour before I had to be home (daddy duties). I discovered this 8 bit skull which the author of it is a little unclear. And I quickly crafted a plan. 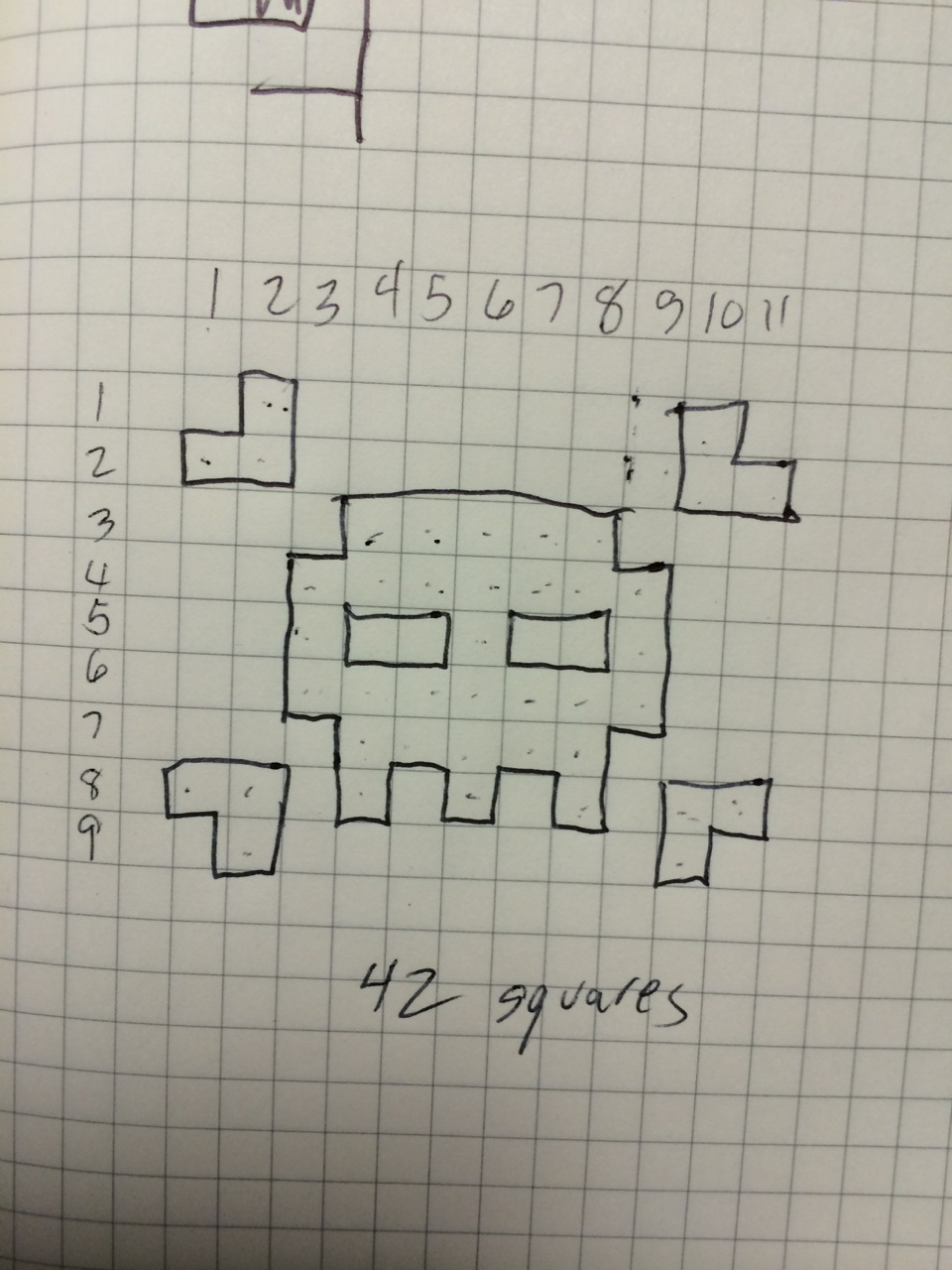 But I had no dark paper and ran around the campus looking for construction paper, which I easily would have found in my house! I mean any five year old knows the value of construction paper, why not an institution of higher education! So I made due with printing squares from photo copier and cutting out 42 of them. 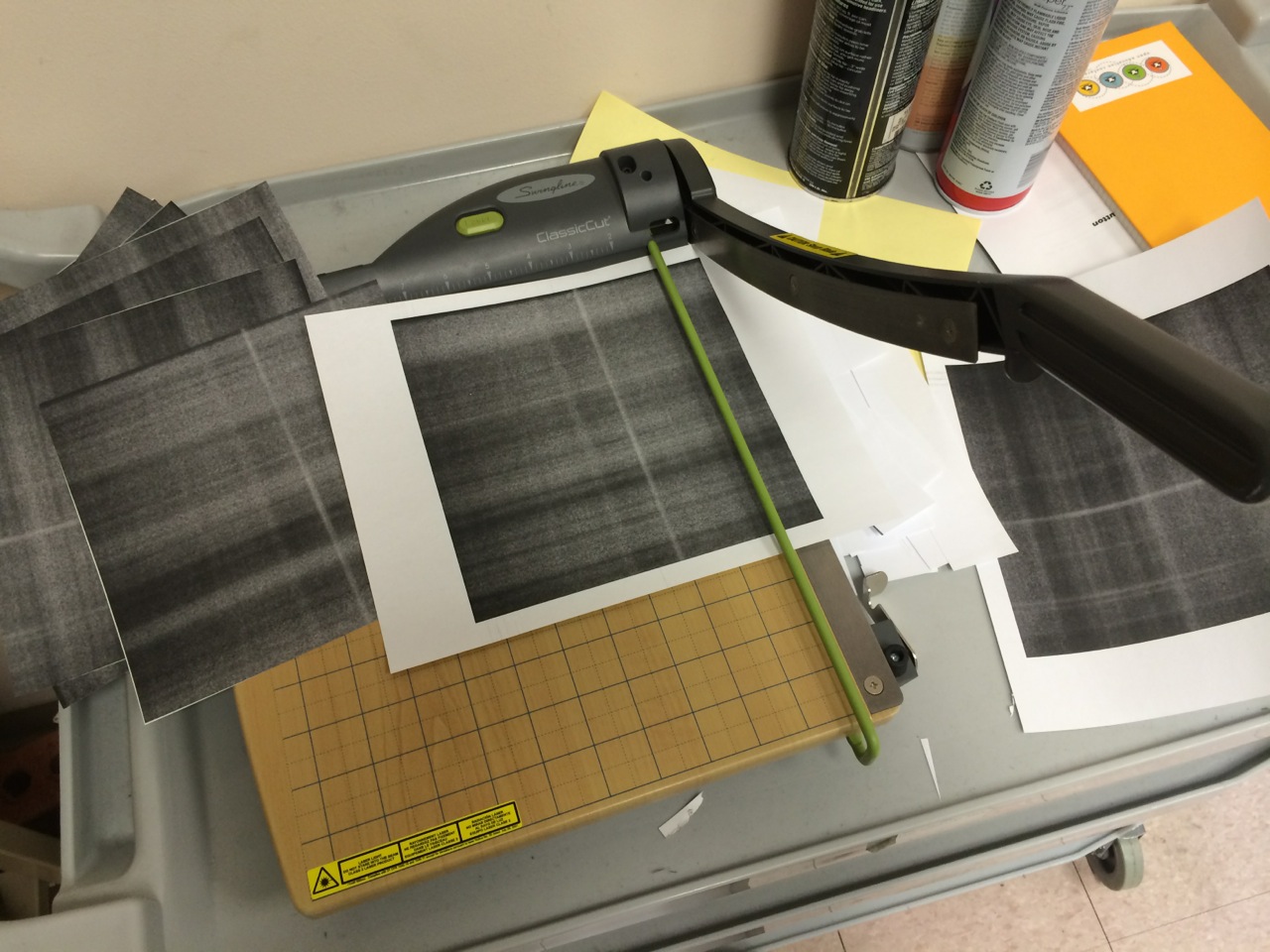 Now with only about fifteen minutes left before I had to leave, luckily I found a couple students to help. One to document, and one to work the Scotch tape and help me translate the drawing to the wall. That was surprisingly difficult actually, the squares on the paper are so little compared to the wall!

We pulled it off, and I’m so excited about the possibilities. I’m really hopeful that Ryan Seslow, our students at York College, and I come up with a fabulous project we can all collaborate on. 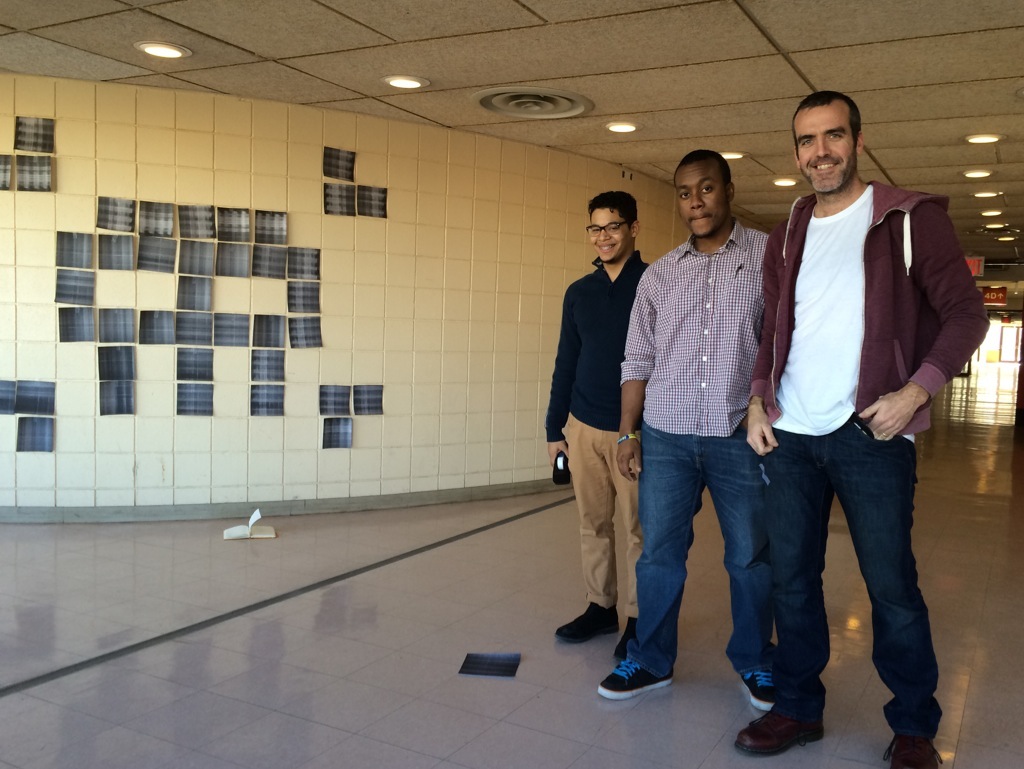 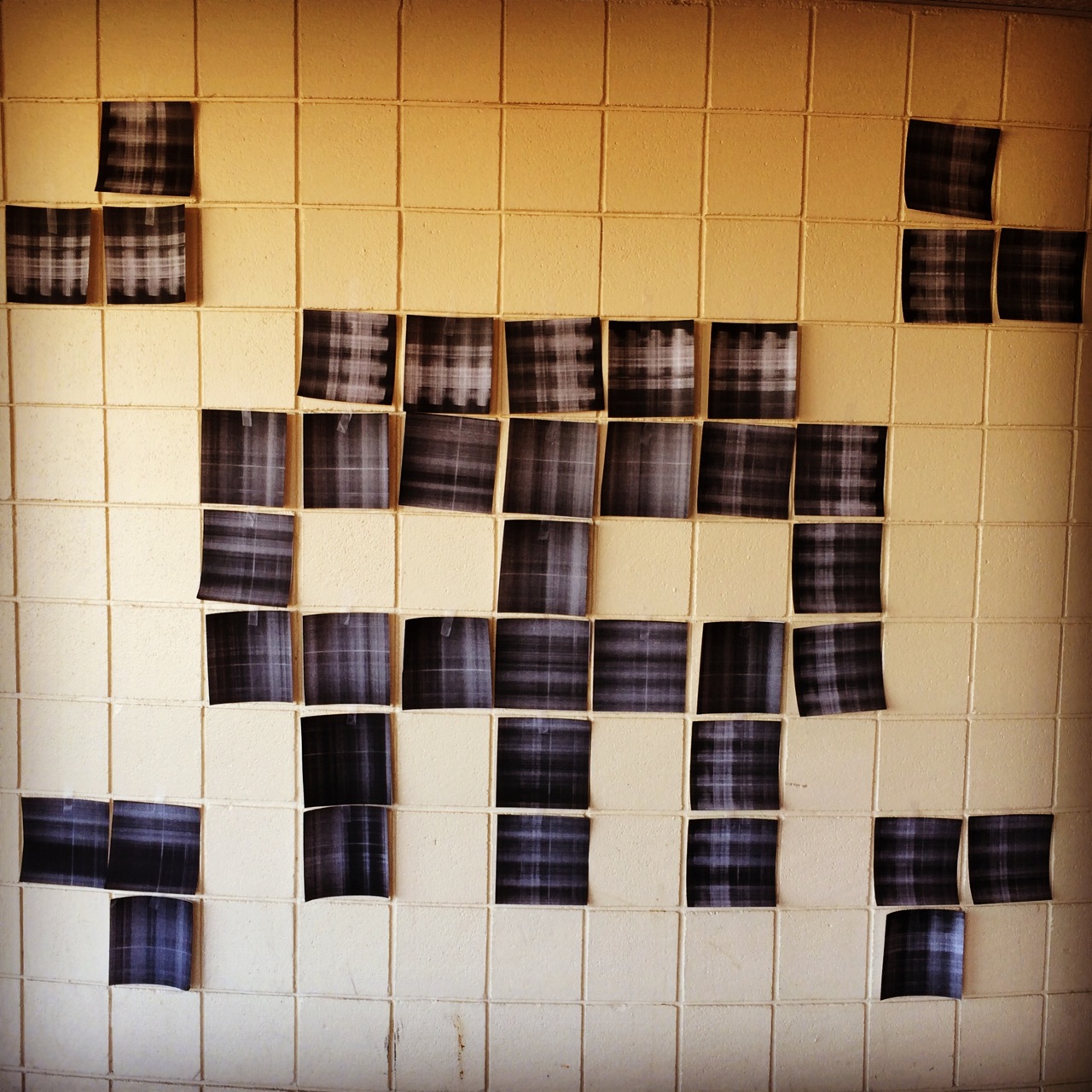 Jason did some 8-bit pixel skull work back in 2011 that you might be able to build on if your other source is a bit sketchy. I used his image for the basis of some pixel art lawn art previsualisation I was trying to put together at the time.

I like the passion in the making of. Maybe you can go further and find some craftsmen who can replace the appropriate tiles with different shaded tiles.

Endless possibilities, such a great idea, thanks for making your process transparent man!

@Rowan thanks for the reminder of your dabbling with lawn art! Bummer that all of @draggin’s image links are dead on his page though. I did get to see his 8-bit skull on your post and it’s awesome. I’ll see if I can adapt it to our wall which is only 12 bricks high.

@stefanie I was really excited about just seeing an example of piece on the wall with little time. Working with @ryan and the York students hopefully we’ll come up with a workable model that allows for making a lot of different pieces. Probably starting with velcro and quality construction paper. I want to start with a historic early GIF like the Dancing Banana and have it rocking out on the wall.

How would you make the banana dancing on the wall? Light?

I’m thinking a stop-motion method as it’s only eight frames and four colors to manage. We’d create the squares and use a clear velcro on the wall, or some other method makes moving them around fairly easy.

The real kicker will be if we can combine it with a motion controlled stop-motion camera slider. We have a rail system, but we need to connect a servo motor to make increments possible. But baby steps, the banana on the wall hopefully will happen in a week or so!

That sounds exciting. I wish I could be part of it, but …

Hi Michael,
I am very chuffed that a pretty simple gif has somehow been involved in this project, so cool to gif in the real world. Think I might take the skull back into virtual an some javascript colours…

Would love to see the skull spun with your javascript skills. And this Monday night EST I’m hoping to light a fire on the wall. Maybe we can live-stream some of the action.