Ever since Jim Groom pointed to the amazing animated comic covers created by Kerry Callen, I’ve been jonsing to make one. I loved the simplicity of the animation in each of the four GIFs he created, particularly the Spiderman and Ironman GIFs which each clock in at only three frames each. There is so much time and love for the comic and the story that goes into each one.

It took me a while to figure out which cover to do, but I finally settled on the cover for the third and final installment of Frank Miller and Geof Darrow’s Hard Boiled title published in the early 1990s.  Miller was well know for his work during the 80s on Ronin and Batman: The Dark Knight. Both were part of an emerging trend in comics to write for more adult audiences (it dawned on the comic book industry that pre-teens weren’t buying comics anymore, it was the hardcore 20-40 somethings). Alan Moore‘s and Dave Gibbons‘ DC miniseries Watchmen was published the same year as The Dark Knight and both were hugely successful critically and financially, largely due to their more complex characterizations of heros and heroism. They’re both just great pieces of storytelling that happen to include both writing and pictures.

Due to these successes the Hard Boiled project was highly anticipated and Miller decided to not pencil the series instead turning to relative newcomer Geof Darrow to do the artwork for Hard Boiled. Darrow’s work is ridiculously detailed, rendering unimaginable amounts of story into a single page. Miller I imagine must have responded to this as there is very little dialogue throughout the series. 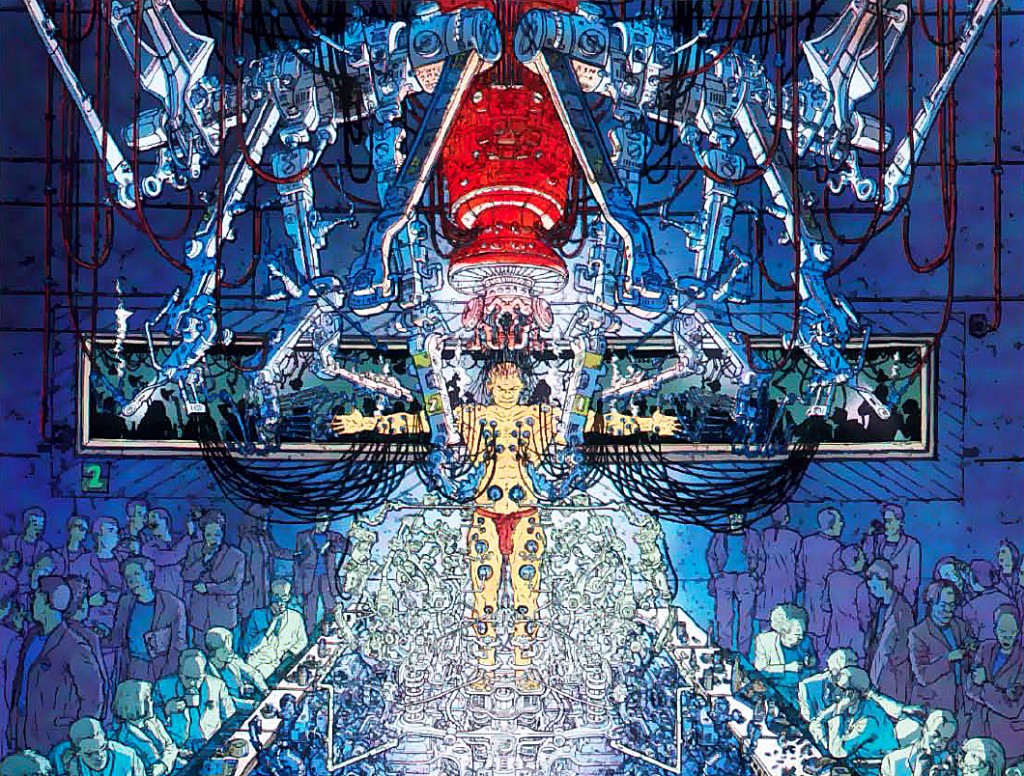 Darrow went on to become a creative consultant for the Wachowski Brothers for their Matrix series. You can likely see the resemblance to Nero’s awaking in the image above – an endless number of tubes and machines connected to tissue.

On the technical side, making this GIF was quite a long process. I spent a lot of time in Photoshop pulling apart the original cover image to create the six frames for this animation (there’s actually 53 frames needed for the timing, but only six unique ones). I used the pen tool a bunch to make paths around the titles and other parts to create very accurate selections. Also there’s a lot of use of the motion blur tool to create the three frames of the head being blown up.

But my favorite new tool is the new “Puppet Warp” tool which allowed me to animate the gore on the inside of the skull. It’s new to CS5 and takes advantage of some crazy algorithms that allow you to distort portions of a selection based on defined pivot points. It’s really, really cool. Here’s a little screen grab of the tool in action:

Here’s a look at just the gory parts animated, I hope you like the GIF, even if it’s a bit gross!