This post was meant for a couple weeks ago and I”m finally finishing it. Hurricane Sandy has passed and isn’t really a headline anymore. But I still have friends that will be without their homes for months. I pitched in the best I could, but my good friend Eric is grappling with the reality of being someone that was literally a half of a block from on the ocean on the Rockaways.

So here’s the post drafted in the week of the hurricane:

When I got home last Tuesday night after having spent hours demoing and dragging the remains of a water-logged basement onto the street in the Far Rockaway, I felt exhausted – and guilty. Guilty because no matter how tired and dirty I was, I had heat and a hot shower waiting at my home. But my friend/colleague Eric, from York College who’s home I’d been excavating, would remain cold and muddy. Eric’s home is a half block from the beach, much of which now covered his street with sand and debris, including a couple hundred square feet piece of boardwalk which had drifted and settled in an open lot across from his home. 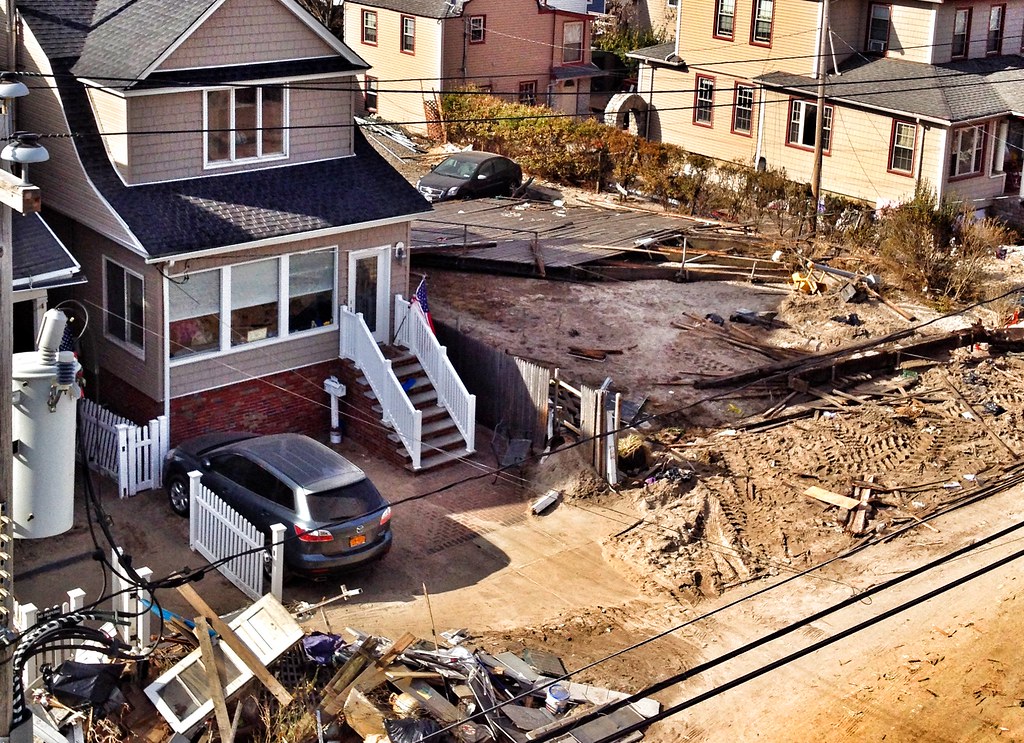 I had seen pictures of the mountains of garbage being laid out on the streets of the Rockaways the day before, but to experience it all was a different matter. I caught a ride with a Brooklyn friend (our kids go to school together) to drive down. Josh grew up on the Rockaways, and his parent’s home had been flooded as well. We packed a bunch of supplies and a half-dozen foot long sandwiches. Josh is a salt-of-the-earth kind of guy and we spent the first hour visting the homes of his old family friends handing out food, supplies, and well wishes. These families were all working hard and surprisingly upbeat facing the long haul ahead of them to return to normalcy.

We then headed west making slow progress down the main boulevard. There was a local pub that had it’s logo on a canvas awning listing over the steps upward which lead to a restaurant no longer there – the entire place and block behind had burned down. Blocks later, dozens of cars had a film of sand coating them and had settled in a hodgepodge against the fence that bound their parking lot.  And as we got closer to Eric’s many roads became impassable as there was so much garbage from homes and debris from the beach. 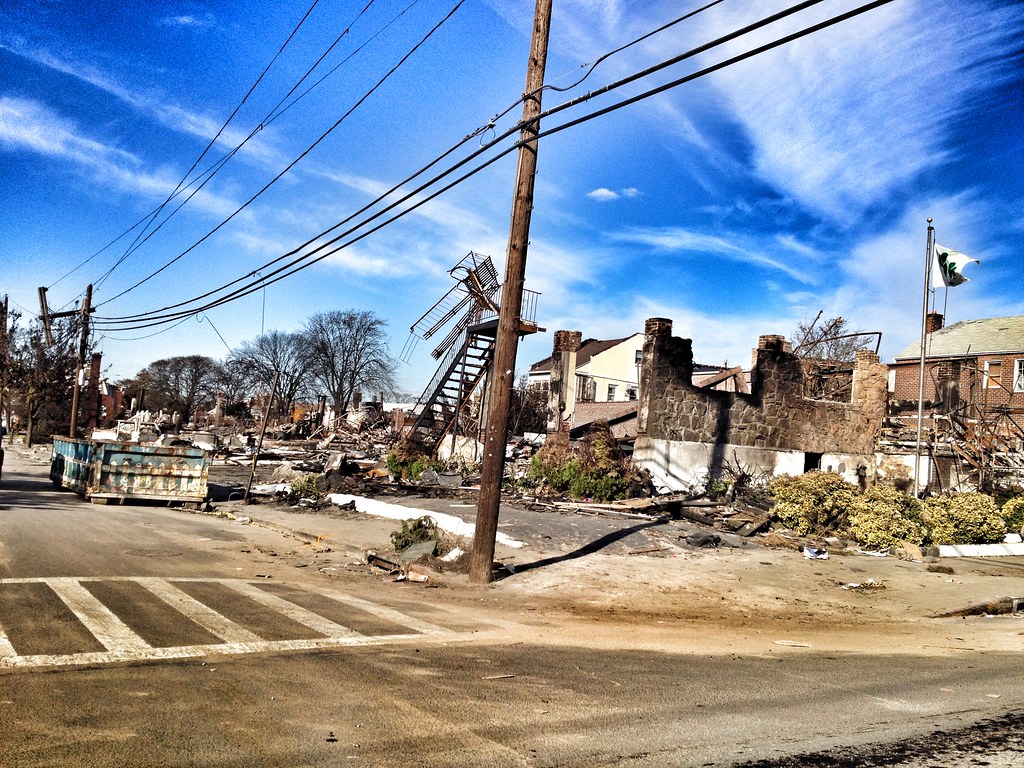 Eric gave Josh and I a quick tour of his block and the beach close by. All that remained of the decades old boardwalk were the concrete pylons that supported it. 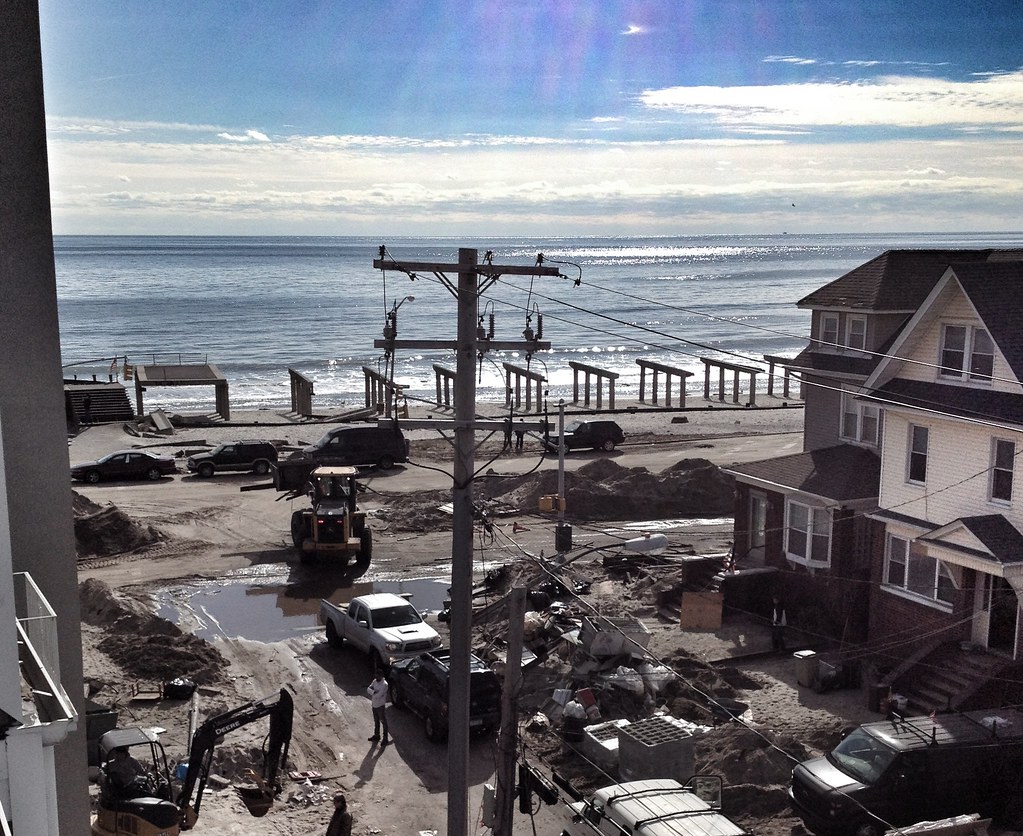 A frontloader did it’s best to break apart a massive piece that had slammed into a beach front house. Eric’s condo was on the third floor and without water damage, but he’d been without heat and water for a week now. And the furnished basements of his neighbors were destroyed. As we surveyed the work ahead of us (Josh graciously volunteered to stay), demoing the soaked drywall and insulation, something amazing happened.

Six people seemingly popped up out of nowhere and offered to help, and they brought tools – axes, crowbars, and shovels. I later learned that Eric’s wife had heard about the Occupy Sandy Relief group, and created a twitter account just to ask for help. Apparently there is someone that monitors the feed, and they posted the request and location on a bulletin board fairly close by. 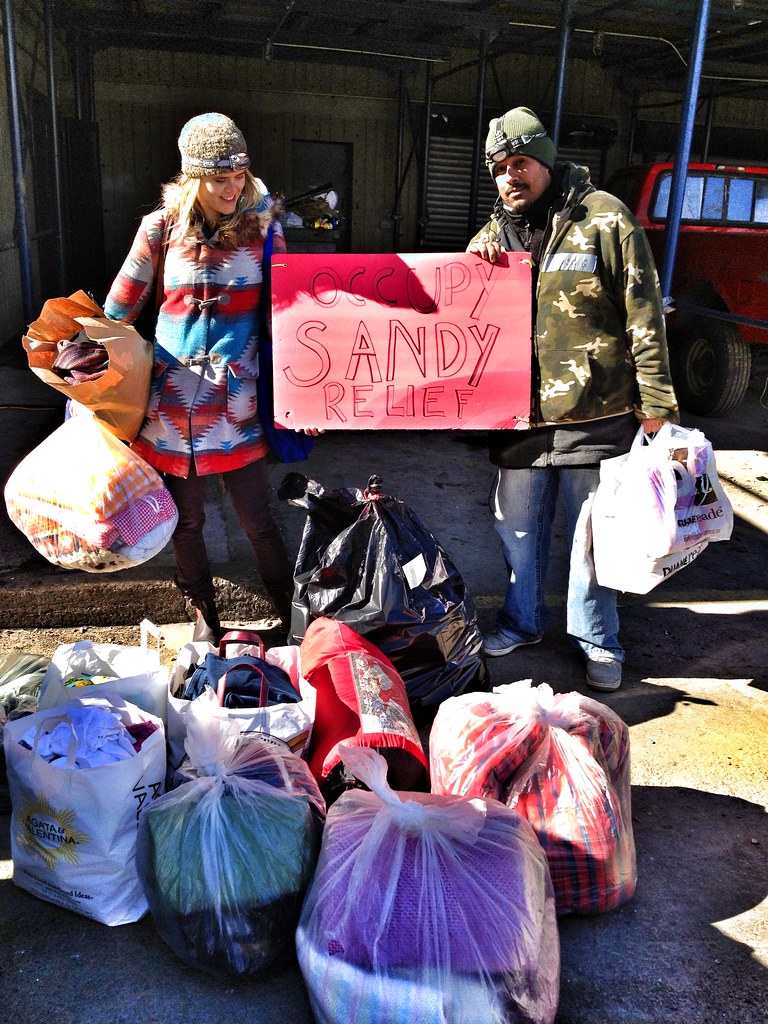 Our helpers came from a number of places. There was a guy with an organic farm upstate and he still surfed the Rockaway. Three women worked an outreach program for the kids of the nearby public housing apartments, and with the programming cancelled they were looking to help. And then there was a man from my neighborhood in Brooklyn who would occasionally check his email, so as he described his boss wouldn’t know he wasn’t at work.

We all exhausted ourselves, humping hundreds of pounds of debris onto the street from the basement apartment’s of Eric’s condo complex. It felt good to help, be part of the recovery effort, but Eric and his wife don’t get to revel in the public spirited sense of accomplishment and contribution. They still don’t have a home.