Eric Metcalf and I have been working on a photography blog about CUNY hosted on the CUNY Academic Commons for a few months now. The original idea was to surface what we thought were interesting CC licensed photos that relate to CUNY and present a new one every day. I spent many hours searching Flickr for images and discovered some really great stuff. These are a few of my favorites surfaced early on:

Roller Derby – I love the pairing of ‘Hunter College Athletics’ with this less than conventional intercollegiate sport. 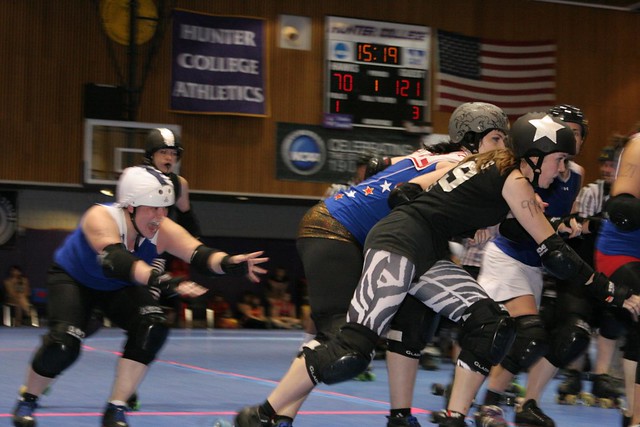 Save CUNY – This is one of many powerful images from the protest of tuition hikes at Baruch College on November 11, 2011 which turned ugly. Boing-Boing puts together a number of pieces of media (including this same photo which I just discovered). 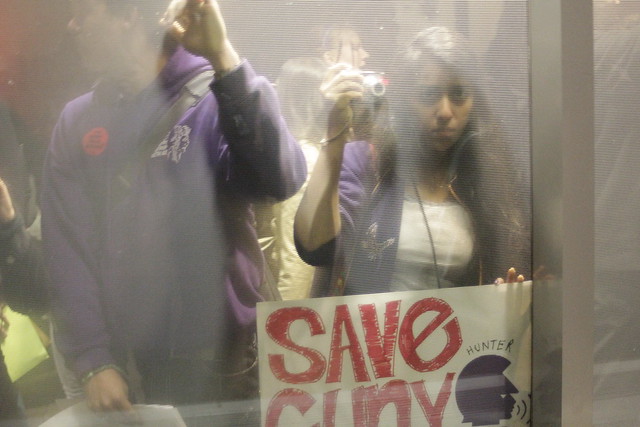 Brooklyn College 1982 ID Card And this artifact is such a great piece of personal history (I identify with this one), also it’s visually emblematic of the times – smoke lens prescription glasses and the old school lamanation process. 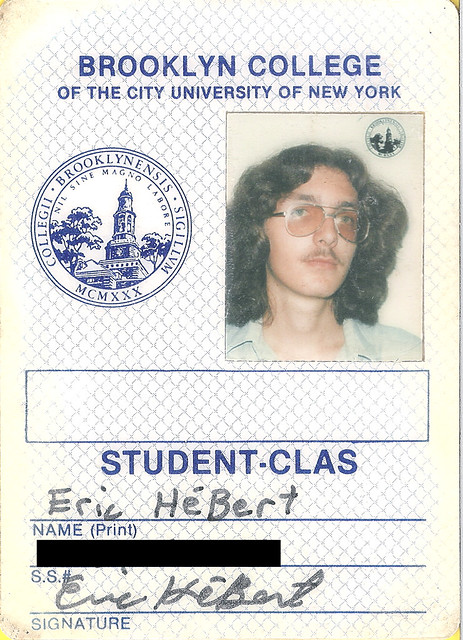 We also tried to solicit the submission of photos using jotform and dropbox accounts and I wrote about Pictures of CUNY for the Commons but  the effort to encourage individuals to contribute their personal archives needs to be reworked. We started to run out of good photos for the blog…

Eric thought it would be interesting to rummage through the York College archives, so we headed into the basement with my digital camera and a librarian. And we discovered some great stuff, starting with this image:

Registration Day September 1968 This was a contact sheet image and I loved how it showcased ID production in the 60s – they wrote your name and title on a chalkboard which you held for the photo – brilliant! 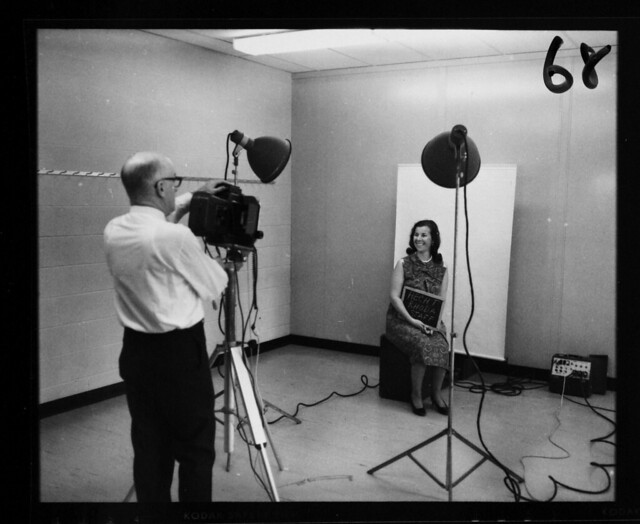 And my favorite photo was, The Philosophy Club. Not just for the fact that there’s an empty bottle of Hennessy at a student club meeting, but the young man shrinking in the corner turned out to be one of the oldest members of York College’s faculty, Howard Ruttenberg. That’s 1970 and he’s still teaching philosophy 42 years later. 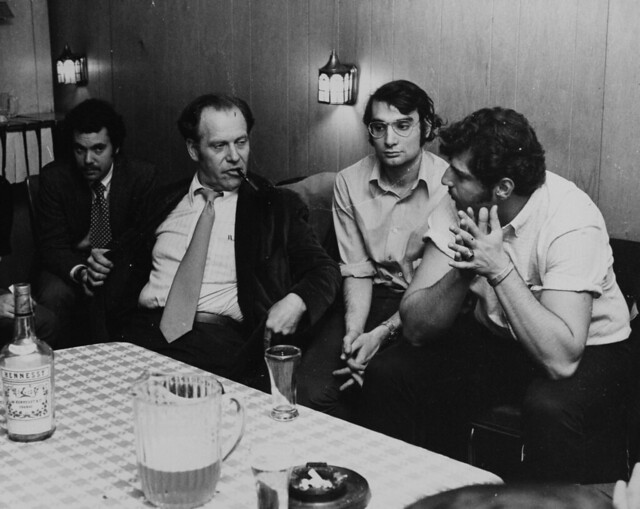 Maura Smale, a Brooklyn City Tech Librarian, learned about our project and turned us onto the archives hosted on a DSpace install – used sporadically by a number of the CUNY campuses. We mostly discovered scans of documents which were part of the administrative history of different campuses, but there were gems to be found like this: 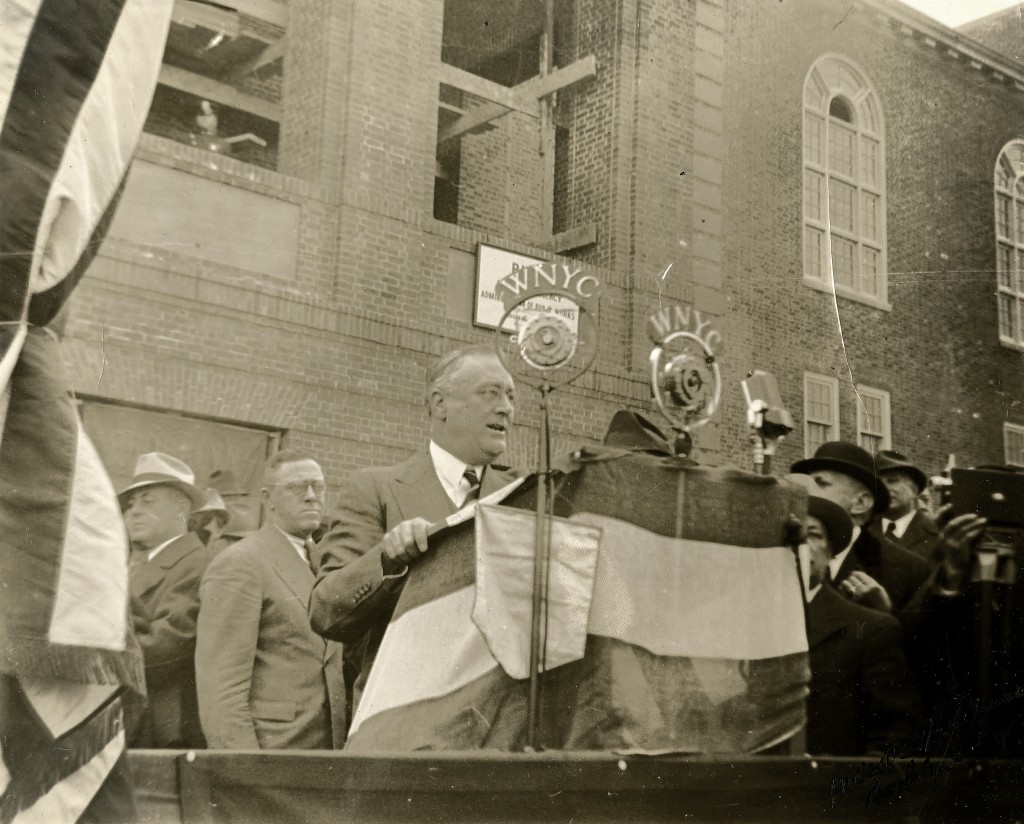 Here’s where my love for the history of CUNY began to move to a different level. I’m a huge fan of FDR’s WPA projects, and his fireside chat quote ‘Make It Work’ is one I wear on a t-shirt. So it interesting to learn that funding for the first outer-borough CUNY college was from a federal project in the 1930s.

I mean look at this, the builders of the campus lived in f*****g log cabins!
Brooklyn College WPA Construction Shack, 1936 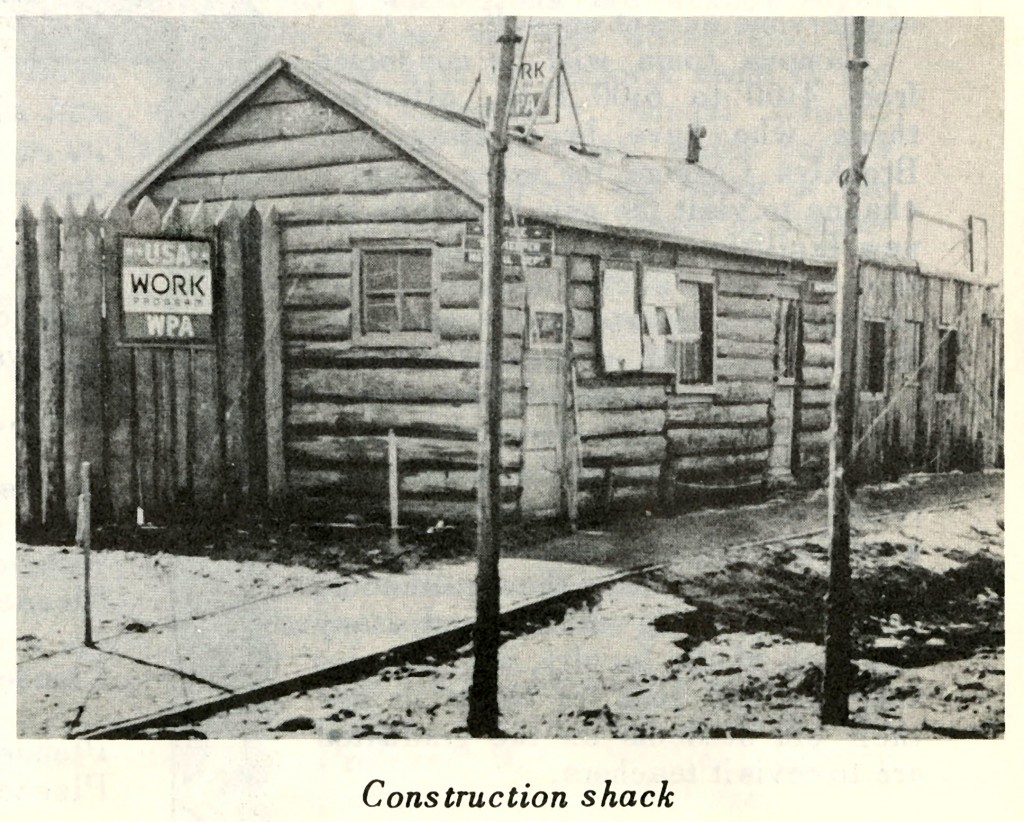 Eric and I discovered other images in DSpace which were alarmingly beautiful such as this image of Electronics Students who were attending the the New York Trade School, which was taken over by New York City College of Technology in 1971. 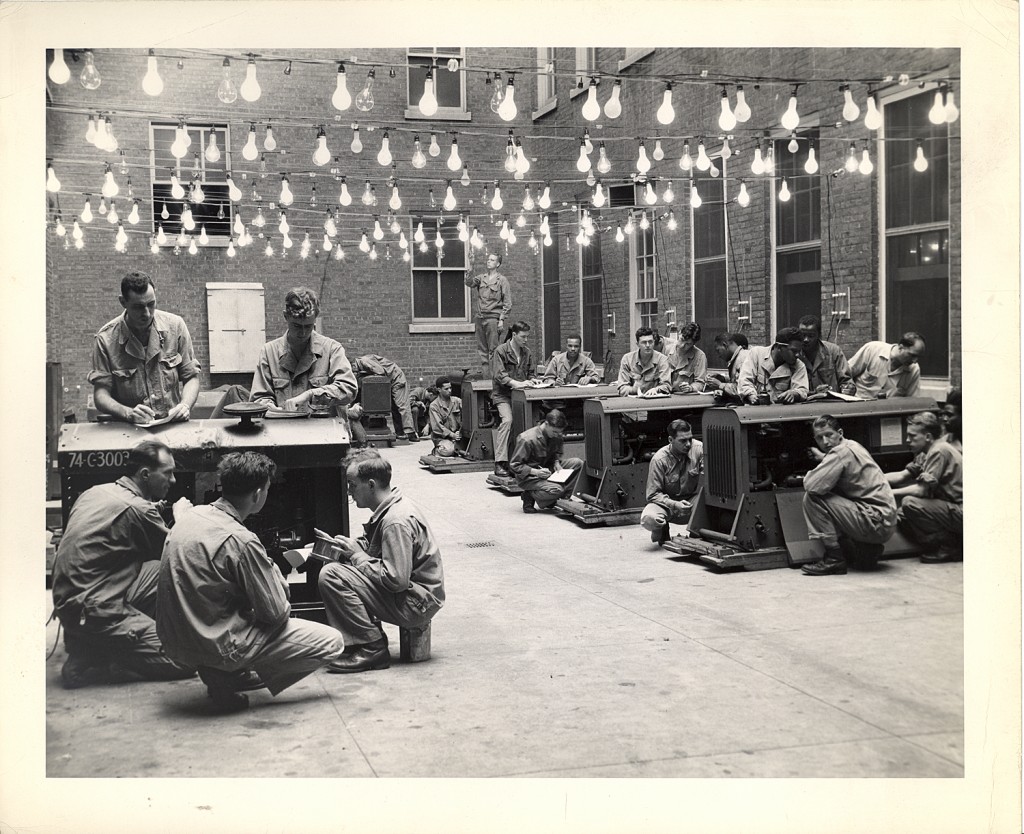 We’ve looked more through the DSpace and visited other campus archives and marveled at the history of CUNY discovered – the Brooklyn College Fair, the origins of the College of Staten Island, the first CUNY chemistry lab, and more.

But by far my favorite image we’ve discovered is this photograph of a slate board at the Free Academy, the original CUNY, in 1899. 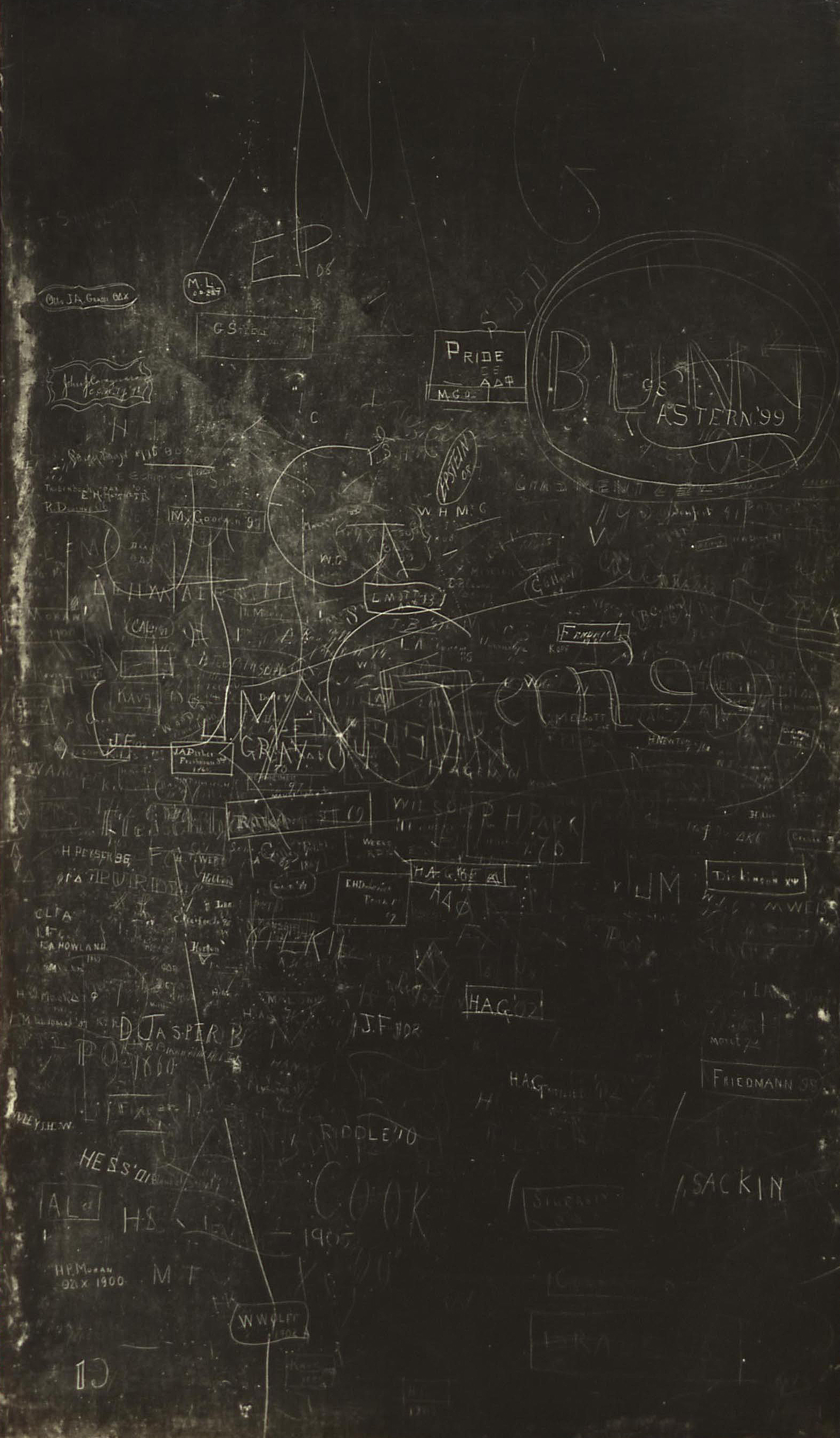 I imagine this artifact as the original yearbook in a single image. Before there was the oppportunity to photograph, write, and layout all the different perspectives of a particular year at a college, there was this effort to remind those that followed, “Epstein was here.” When I look closely at all the scribblings and scratches of the students of the class of 1899, my mind turns to a scene from Dead Poets Society.

Robin Williams played the esoteric poetry professor of an uptight boarding school and he herds his boys into the hallway to gaze at a display case showcasing the images of alumni long dead. And as he encourages them to lean into the glass for a closer look, he pantomimes their dead voices, “carpe diem…seize the day…make your lives extraordinary…”

I like to think of Pictures of CUNY as a channeling of the infinite imaginations of those that believed that college education would change their lives. It’s a weaving of the visual tapestry of the largest public urban university in the world through a combination of public, personal, and institutional archives. Presenting a unique history of the people of New York City striving to find a better opportunity through a free higher education for over a 125 years, representing an almost cliched portrait of the city of opportunity through the lens of the City University of New York.

Such great work, Michael — and what a great addition to the Commons. I love the spirit of exploration that you and Eric share. Many thanks for bringing these moments of CUNY’s history to light.

Thanks Matt. Eric and I have really enjoyed our visits to campuses and learning about each’s unique history. I believe we’re going to be headed to City Tech soon.