This past June I was able to teach a York College course for K12 pre-service candidates, Teaching With Technology during the summer session for the first time. We used a blog I created for the four week session which adopted a thematic title for the class, based on Jim Groom’s Educational Apopcalypse TEDxNYED talk. The site was named Why Believe in Educational Oblivion – WINNER: NONE and in our first meeting, we watched Jim’s talk. He uses 25 animated GIFs drawn out of popular culture to illustrate the point that problems in education are being dramatized to create hysteria and despair. Example: Jim’s analogous GIF to George Bush’s ‘No Child Left Behind’ was Macaulay Culkin from Home Alone.

The talk was a great way to start the class as it emphasized our need to respond to problems not with a call to crisis, but a call to imagine possibilities. There is energy, excitement, and even a sense of humor possible when you are asked to be creative rather than alarmed.

Throughout the four weeks we played with a lot of tools and ideas I’d been learning about over the past two years: ds106 assignments, Michael Wesch’s Vision of Students Today, a ‘visit’ from David Kernohan, a number of the DML2012 Ignite talks, and more readings and videos from Gardner Campbell, Jim Groom, George Siemans, Dave Cormier, and others. The students were responding to and creating so much great stuff for the course, really engaging one another (there were 160 posts and 772 comments by 10 students during the 4 weeks).

But I think the most exciting part of the class was when we watched Grant Potter’s Faculty Academy talk at UMW where he connects the values of maker culture to education. I was at Grant’s talk this past spring, but this time in the context of this class it rang even more true. Knowing that every classroom will always have resource gaps (particularly in NYC public schools), we took this as an opportunity, not a crisis.

To demonstrate our resolve, we decided to do a maker project across the last three weeks. Students were going to create a tool that they could use in their future K12 classroom and describe their building it and then demonstrate it’s use. I even got in the action and built an microscope adaptor for my mobile phone. And at the end of the semester we had a Maker Fair to which students brought family and friends and we live streamed it for those that couldn’t be there (with much help from Daniel Phelps, he rocks).

It was really an amazing celebration of the great stuff students made – a $20 air conditioner (to help students keep focus in hot classrooms), an Altoids box heater (for classroom survival and roasting marshmallows), an essay robot, a set of ball handling skills training tools. We also had great fun making some human animated GIFs:

and ‘SciFied’ some toys and objects people brought to the fair. 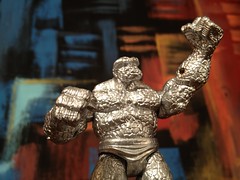 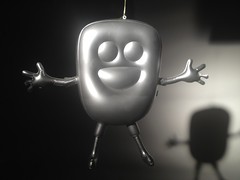 This summer class also reminded me so much of where my interest in art, technology and creativity came from – building at a young age. I was lucky enough to have a friend named Chris Hall with whom I spent many hours in his basement and backyard tinkering with just about everything imaginable. We made model cars, rockets, fishing flies, paper-mache medieval castles, even our own paper and pencil war game based on hand drawn diagrams of imagined weapons. We built forts behind the creak and hung out in them talking and imagining. We’ve sadly fallen out of touch, but I known he’s still a maker and can’t imagine he wouldn’t continue to be one.

The inspiration to tinker and play can come from lots of places, and I think this summer course helped a number of my students. Here are a few highlights from their final reflections I thought I’d share:

From arod2290: ‘This class during the 4 short weeks has opened my mind to taking on my new career in a completely different angle. Its help me think outside the box as well as express my views, my philosophy and simply believe that it all starts with your own approach.’

From reyawesome: ‘This was a course I’d like to see other students take because it honestly allowed for exploration, mistakes and growth.’

From Malikaaaaa =): ‘You can say that because of this class I have become a “tech nerd” in some odd way.’

These are just a few of the many great things written and created by the students in this class, which I continue to enjoy immensely for it’s opportunity to learn from and with my students. I couldn’t have started the summer in a better way.

4 replies on “Apopcalyptic Start to the Summer”

[…] everyone. I made a final post about our class on my personal blog, it includes the maker fair video and the many animated GIFs we made that […]

Man, those human animated GIFs are awesome, as is the Maker animated GIF! Sounds like you all totally nailed this 4 week experience, good for you. Nothing better than an awesome class, and integrating the Maker experience into the course was brilliant. Kudos!

What an astounding experience you made for these teacher students; the energy and ideas came though loud and clear in the blog posts and their projects. More so, the combination of “doing” something I can see as an experience they will take back and replicate.

In total though, the message of how this class is something we need to spread as much as possible, the idea of getting out fo the paralysis of how bad things are and onto what can we do about it. Make stuff AND art, danmit!

@jim integrating animated GIFs into just about any learning moment is now an obsession. I’m thinking brainstorming sessions of any sort should end with, “that’s a great idea, could you sum that up for me in a few animated GIFs?’

@alan the course has just been a pleasure for me. I did a winter section as well, and I’m so lucky to have found such great people in the past two years to connect my students with.

Total ds106 make art dammit love fest. And I want that tour bus to happen!!! Let’s kickstarter that, for realz. Tour de main of one’s own – we’ll need an anthem as awesome as this.