On goes the quest to better Grok the GIF. Yesterday I discovered the subreddit Behind the GIFs. Which is basically MS Paint comics with an animated GIF ending. The posts originally explained the backstory of popular GIFs from infomercials. This post is labeled the inspiration, so possibly it is the first one (not sure). And here’s the morose Poor Gary, nobody liked him. But all things on Reddit can take a life of there own and it appears the subreddit has become a space for explaining popular GIFs like, Meanwhile, at DARPA…

So this morning I’ve jumped in with a little Hulkamania splaining. It’s titled, “Stop Ruining my Heroes.” 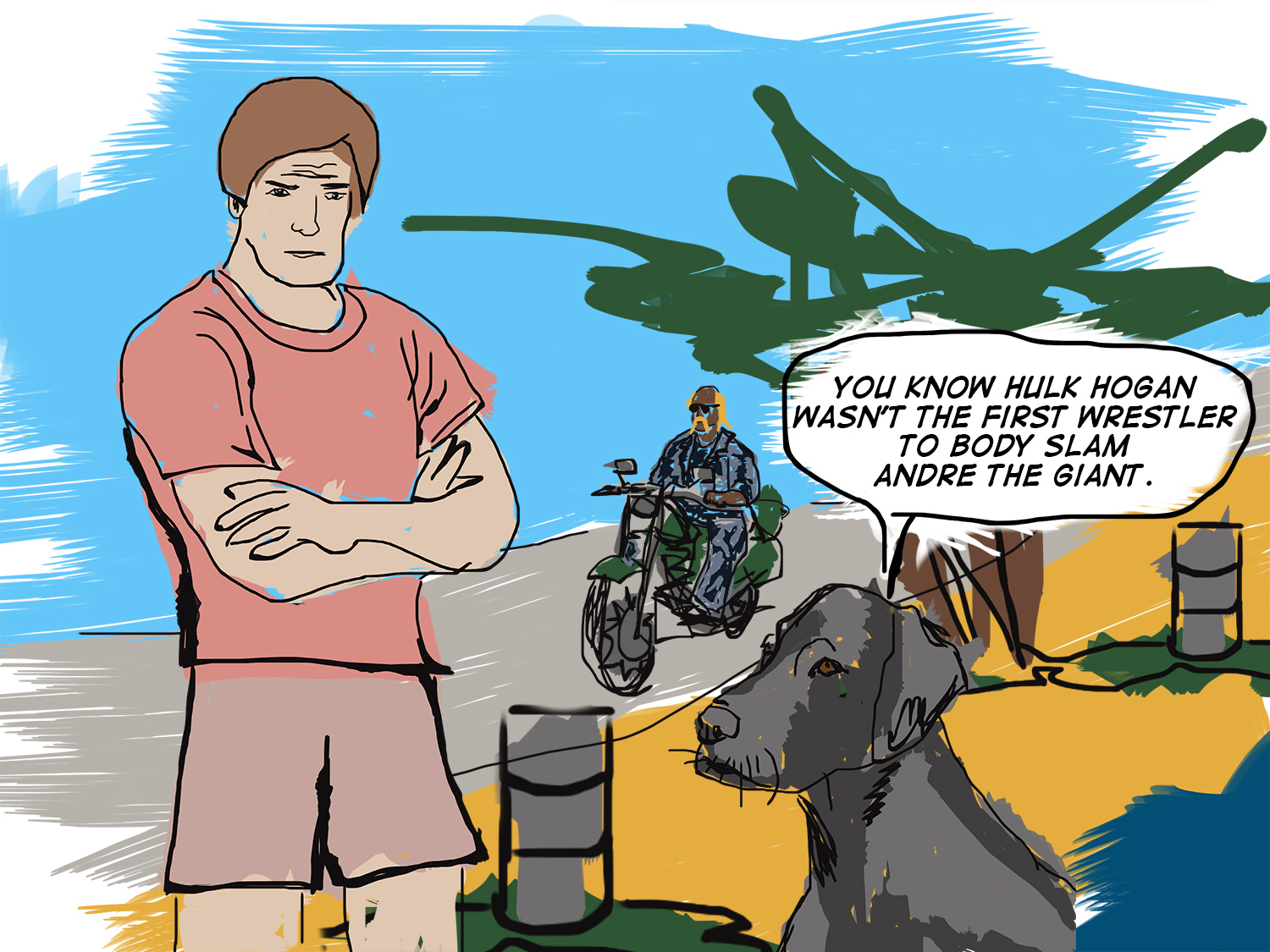 I Tumbled upon this GIF recently and thought it definitely deserved some explanation. The original GIF had text embedded which described that the filmmakers of Mr. Nanny didn’t happen to notice the dog being tossed in the water in the background. I suppose that’s possible but given it’s a short shot in a quick montage, I would think the editor definitely noticed and more likely it’s a gag.

So to explain why this guy would get so pissed his dog and toss it in the ocean and connect the reason to the Hulkster, a little research was needed. Reading about Wrestlemania, I was reminded of a GIF I made for Don’t Turn That Dial about the ‘body slam heard around the world.’ This was a seminal WWE moment where Hulk Hogan defends his title in a fight with Andre the Giant, by actually hoisting the 500+ pounder and slamming him to the matt. Crazy right?

Well apparently the Hulk had already body slammed the big Frenchman, and a half dozen other wrestlers had too. – at least according to a piece of trivia about Wrestlemania III on IMDB. So the dog knowing this bit of information and wanting to needle its master, a devout hulkamaniac, let’s this one fly right as the Hulkster himself is cruising by on an awesome chopper.

As a post on Reddit it’s doing ok so far. We’ll see maybe it’ll hit the front page.  😉 Probably not. But either way I thought this would make a great #ds106 assignment so hopefully #prisoner106ers can have some fun with it.

2 replies on “Ruining heroes to better understand the GIF”

[…] is a start to a hopeful series of posts on how I Grok GIFs in which I make GIFs for and explain a particular GIF type, culture, or […]

[…] I have been thinking about it for a while. Could not think about the tools I would need and had to read Michael’s own example a few times to understand it. In his post he refers to the subreddit Behind the GIFs which is […]