I recently came across via BoingBoing this graphic designer that hosts a site Phil are Go! where he occasionally posts ‘graphic gifts.’ These are pieces of clip art that he’s created by lovingly extracting a particular graphic from a vintage advertisement.

This exercise would be a great ds106 assignment for a couple reasons *UPDATE now a ds106 assignment. One it’s a great for working on digital imaging skills. A good graphic gift would require a student to work with selections, the eraser tool, image touch ups (via contrast, sharpening, and possibly the clone stamp to remove scratches), and image resizing to create different versions. Also to maintain transparency and post to the web the image should likely be a PNG file.

The second benefit is that students would be creating interesting clip art that could be used by other students (or anyone on the web actually) for design and remix.

As for discovering good resources to work from, I like Phil are Go’s approach which is to look for vintage ads as a resource. I had actually downloaded a number of images of ads from Flickr a number of months ago, intending to use some elements for remix projects. It’s important to start with an image that’s fairly high resolution like this old ad for televisions that I found.

I decided to work on the top television with the feet. The two versions of the TV below are both PNG files where the screen is transparent. The idea is that some one could put anything in the tv (even a GIF) and use it as an old fashioned TV. At the top of the post I used the TV to put the Beastie Boys on a TV the way I originally saw music videos in the 80s. 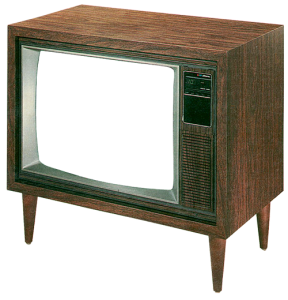