Seeing Jim Groom’s minimalist movie poster for the The Thing finally get some love from Web Urbanist inspired me to finally take a stab at this assignment. I actually don’t need a lot of prodding to make a piece of design (especially for ds106). 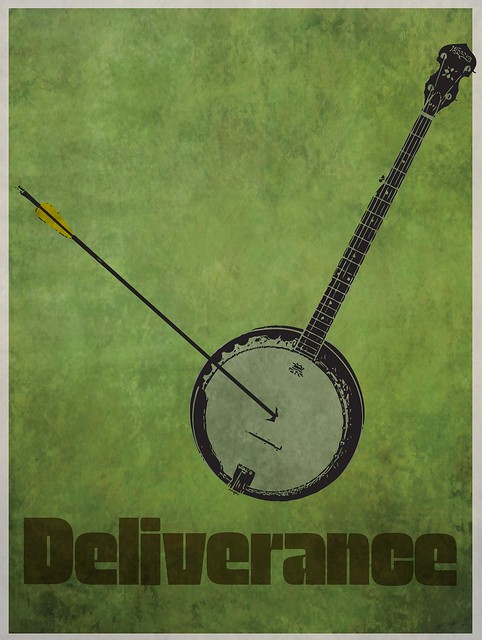 My poster is for the John Boorman classic “Deliverance” starring Jon Voight. The song Dueling Banjos was made famous by the film, though apparently the original composer went uncredited (didn’t know that until now). The scene in which Drew plays the guitar and a boy plays the banjo is probably one of the most memorable scenes, and sets the tension in the film between the “city boys” and the “locals.”

I made the poster mashing a couple of previous ds106 assignments actually. I’d done a four icon challenge of Deliverance from which I reused the arrow, banjo, and title. And the background was reused from the “averaging flickr assignment.”

A little extra work was done to create the hole in the banjo from the arrow using the vector tool in Illustrator. And I did some hue/saturation work on the background in Photoshop to rework the yellow averaging flicker image into a muted green.

« I Have The BuddyPress Power! » Happy Black Bava Tuesdays